The Library Over the River…

Most of my readers know I seldom re blog, in the past five years I can count on one hand. I understand we do not have the right to tell other communities what to do, BUT in this case we must stand up. This Library must remain where it is OVER THE RIVER!!!

The Library Over the River…

The Renton Public Library was dedicated in 1966 and opened its doors in 1968 to replace the former out grown Carnegie Library, Renton’s first official Public Library built in 1914.

(See below: The Library that Neva Got Built.)

I’m intentially avoiding politics today yet suffice it to say the local politics, the State, and the fine citizenry of Renton, Washington have been of differing opinions and quite divided about a proposed location for yet another new library more centrally located in very downtown near the Piazza and the Metro Transit Depot.

The current Renton Public Library (The Library Over the River) exists on the SE corner of Liberty Park, Renton’s oldest Park, at the very eastern edge of old downtown. It’s a typical 60’s building right out of the Century 21 sensibility, with simple clean lines and not overly state like many of the government buildings of the time. It doesn’t look like it could 2nd as a bomb shelter or an amunition depot. 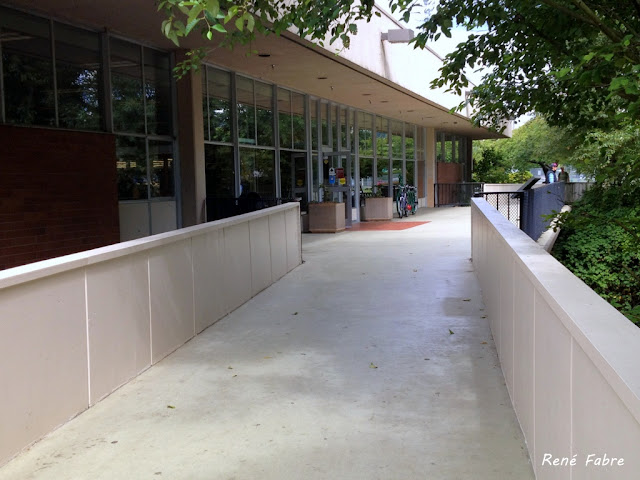 Personally, I love this place. I like it just as it is and quite frankly I think anyone who’d want to move it is an idiot. (And I wasn’t going to get political!) Many towns strive for decades to have such a wonderful setting for a library and for other’s it’s simply to late, downtown is already developed and there is no special place like this to enjoy a public space who’s purpose is learning, culture, knowledge, and being a resource to enjoy and benefit from with extras like the park, the river and its trail.

The Library over the River is one of a very few in the United States like it. Arguments are being made it should be scaled down for these times. I’m the first one to agree downtown needs a lot of help but not at the expense of an area of the city that’s already working well and wonderful. It’s not an either or proposition… 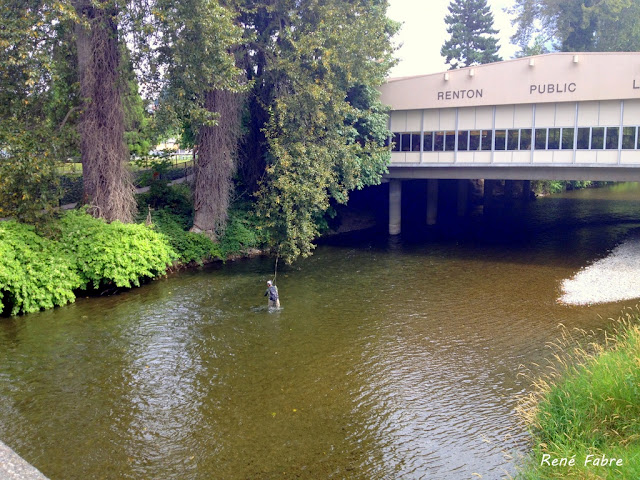 The point was made that it should be next to a major public transit center. The Metro Bus Depot is only 2 1/2 blocks away, and there is a bus stop at the entrance. I used to work downtown Seattle and walked from my office 3 1/2 (bigger) blocks to the Seattle Public Library, up hill (both ways :O) at least once a week, if not 2, and the setting was no way near as beautiful. 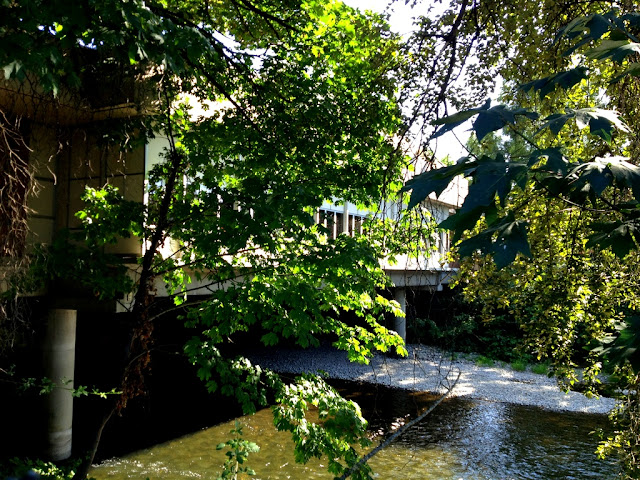 I spent thousands of hours here over the years for many different reasons and I brought my kids here too in hopes they’d learn to appreciate what it had to offer. Through feast and famine, regardless, we had wonderful times here and enjoyed the river and the park.

From the Library you can walk the Cedar River Trail north (about a mile) all the way to Lake Washington. You can also head south from here and walk a few miles along the river towards Maple Valley.

I for one am happy that (even though we lost our very own city library and it’s now part of the King County Library System), the citizens of Renton voted in early August (3 to 1) to keep it right where it is.

Click the left picture below to see “The Library that Neva Built”, Renton’s first public library, and the 2nd pic for a post about the sculpture “Homework Comes First” that is on the library campus, and the 3rd Pic for more information about the Cedar River Trail Park.

Please Note – The views expressed herein reflect only the individual’s personal views
and are not the views of the author’s employer.